Halloween has always been one of my favorite holidays, because its a chance when everyone can play openly with their imaginations. For the past ten years, my costume has been simple but I’ve found rather effective: 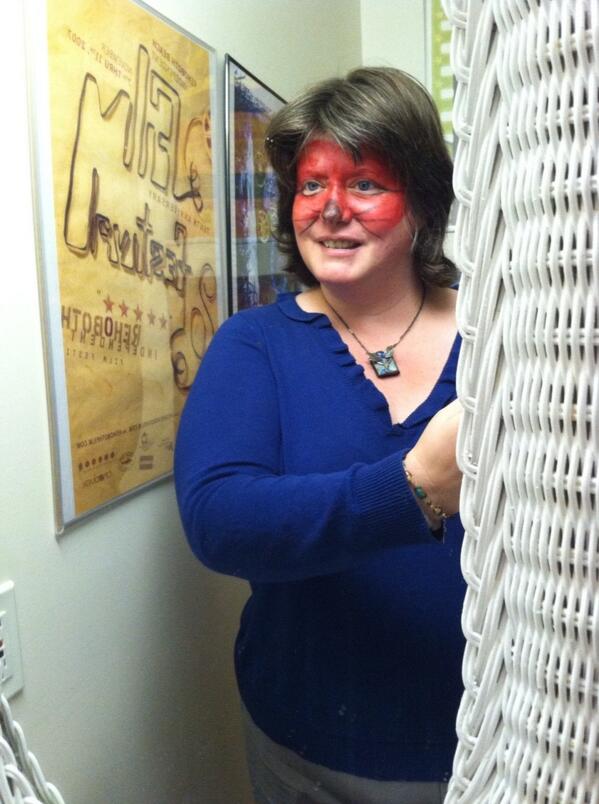 As you can see, I’ve painted the top half of my face to look like a red fox, which was a skill I learned how to do when I took a theatrical make up class at a local theater in middle school. That was one of my favorite theater classes because I find it fascinating how it doesn’t take much to shift the character of your face and body.

Halloween is full of people who understand that and a chance for everyone to share various sides of themselves. Since the explosion of YA lit and cosplay becoming more widely recognized, costumes based on what someone loves are easier to spot as we share our inspirations. When I was in elementary school, I had two costumes that were my favorites and both of them grew out of my love of books. One was Glinda the Good Witch from the Oz books, I based my costume on illustrations in the original hardcovers that my parents had and my mother and I found all the makings at a craft store. The other favorite was Will Scarlett/Stuteley from Paul Creswick’s Robin Hood, I made myself a felt hat and my father cut me a quarter staff which I carried to school. For most of my life until my parents moved out of that house, the staff rested in the corner and the hat perched on my desk chair, because Robin Hood is a story that I happen to love. As I grew older I got involved in theater and Live Action Role Play which gave me chances to try on various guises and learn more about how to make someone see me differently. When I try on another identity through a costume, writing, roleplay or another avenue, I find myself examining things from more angles.

Now my costumes are simpler but I’ve found that this face paint gets everyone to look twice at me. Today when I went to pick up something, a woman meowed at me and other people smiled in surprise when they noticed that no, I wasn’t looking normal. I think my favorite reactions to this face paint are the quick smiles as that person has had a little bit of weird in their life.

I hope everyone who does something for Halloween enjoys it and remember to look at the world a little sideways sometimes to see that nothing’s ever quite what it seems. As in Celtic mythology, Samhain and the turning of the seasons means today is when the walls between the worlds are thinner. Also its a time to celebrate the harvest of the summer and prepare for the cold of winter. Brew a hot drink and keep your eyes open. Happy Halloween!